For the past few weeks, I have been enjoying Sally Russick's Focusing on Life photo challenge.  I am not alone in this and it seems the numbers grow every week.  I have liked getting to know fellow bloggers a bit better and have loved all the wonderful photos.

This week, for me at least, was the most challenging yet.  Sally's prompt this week was to create art.

I've never been able to draw, although I have tried from time to time.  I am continually amazed by those who can put a pen or pencil to paper and just create (Lori Plyler comes to mind).

For a few days, I pondered art and how to create it.  I thought about beading or playing with clay.  I realized I was starting to make myself a bit crazy.  Then, I told myself to stop worrying and just have fun.  Because fun was involved, I asked the kiddo (our resident artist) to join me.

We grabbed her ever growing collection of crayons and markers. 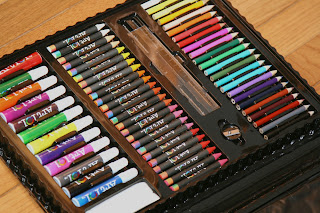 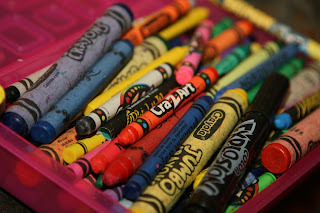 The kiddo wanted to start with this awesome toy Santa brought for Christmas.  Once we started, we couldn't stop.  The two of us had a great afternoon. 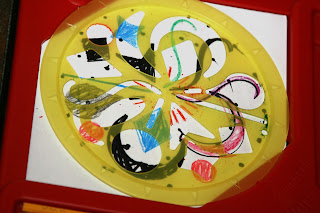 We came up with more than a few creations.  This one looks like something I could bead. 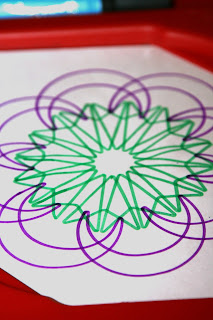 While this may not be art in the traditional sense, the kiddo and I had fun with shapes and color. 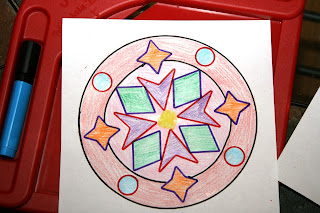 My favorite, though, was the first one the kiddo made. 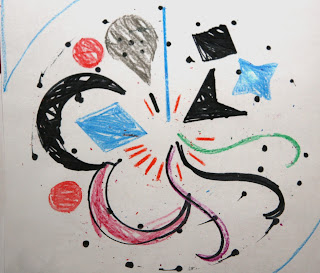 Sally, thank you for another fun week.

Please take time to check out Sally's blog to see what the other participants did this week.  All of these ladies are talented and I know you won't be disappointed.
Posted by Tanya at 9:00 PM 33 comments:

Last week, it seems, was all about action:  our words for the year.  So many of our words suggested that we take charge of our lives and set out to achieve our goals.

I've always enjoyed word puzzles and games.  I look forward to my daily crossword as a way to escape from the day.

Some time ago, I switched from doing the crosswords from the newspaper to doing them on my iPad.  However, it just isn't the same.  This week, I bought a newspaper and completed a crossword by hand. 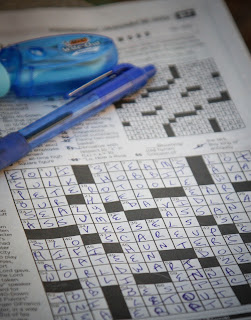 Yes, I do my crosswords in pen.  I wish I could say I was some sort of crossword super solver, but really, I use pen because I can't see pencil on newsprint.  (My dad is the same way.  It was he who taught me to always have a bottle of white out near by.)

Sally, thank you again for a wonderful challenge.  I look forward to next week.

Please take a few minutes and visit the other participants on Sally's blog, the Studio Sublime.

To everyone who left such wonderful comments on my last post, thank you so much.  I cannot  express how much your kind words and encouragement meant to me.
Posted by Tanya at 7:30 PM 42 comments:

About a month ago, I received a surprise package from Kalmbach books.  Inside was a short note telling me that the necklace I made for Kalmbach's Bead Soup Event was an "office favorite."

As a prize, Kalmbach sent an advance copy of Crystal Jewelry Inspiration.  (Thank you, so much!)

This gorgeous book contains contributions from thirty Create your Style Ambassadors.  And, can I tell you, these artists know how to use crystals!

The earrings on the cover are designed by Lilian Chen and are just a sample of what you'll find inside.

The book is full of inspiration and eye candy.  The gallery in the back is drool worthy.

So many projects caught my eye, but I will show you just a few.  (The following two pictures are used with permission from Kalmbach.) 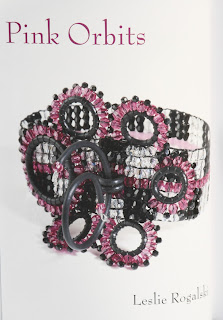 I was blown away by Pat Riesenbruger's "Tribal Princess" cuff.  Pat's fiber art is amazing. 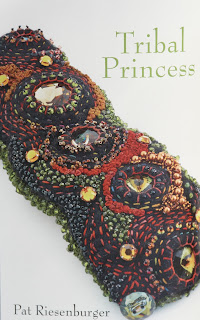 There is truly something here for everyone.  The projects range from wire work to polymer clay, from bead weaving to stringing, from wire crochet to metal work and from fiber arts to epoxy and resin.  The list of contributors is star-studded, to say the least.

Of course, in my mind, Swarovski is synonymous with Marcia deCoster.  Her "Two By Two" bracelet  is a wonderful combination of bead weaving and "bling."  You can see her bracelet here.

To celebrate the release of Crystal Jewelry Inspiration, the contributors are participating in a small blog hop.  Please take a few minutes to visit their pages.  You might glimpse more projects from the book.  Most are having giveaways as well.

Last week, I wrote about my word for 2013.  I didn't mention that what I posted was an abbreviated version of what I originally wrote.

Luckily, Sally's second prompt for her focusing on life challenge is our "word" for 2013.  This means I get a chance to elaborate (and hopefully not bore you too much).

I don't like New Year resolutions.  By February or March, resolutions are forgotten.  I think this happens (for me, at least) because the desire to change doesn't always bring with it the will to act.

I think of an old boxer, down for the count, who wills himself up to continue the fight against the odds.  That's the kind of will I want for the year -- the will to keep fighting.  In my case, this is somewhat literal in that I will be sparring during my black belt test and it scares the hell out of me. 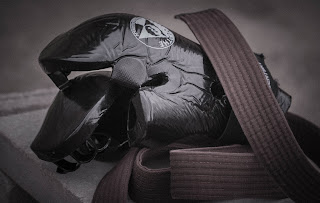 I envisioned an old photo: boxing gloves and handwraps tossed on the ground.  My sparring gloves are not all that close to boxing gloves, but that's okay because my belt isn't really a handwrap.  :)

The effect is similar, though, and I love the reminder it gives me.

Sally, thanks again for another fun photo week.  Please check Sally's blog, the Studio Sublime, and see how the other participants put their words for the year into photos.
Posted by Tanya at 9:00 PM 36 comments:

Sally Russick, from The Studio Sublime, posed an interesting challenge for 2013:  document the year by focusing on one aspect of our lives each week and snapping a photo.  Basically, focus on life through one photo a week.

I'm always looking to improve my camera skills and the challenge sounded like fun.

Sally's prompt for this week--week one-- is a self portrait.

I admit that I am far more comfortable behind the camera than in front of it.  I rarely like photos of myself and always notice those flaws that are so readily apparent in a photo.

I have found that adding texture to the photo can hide some flaws. 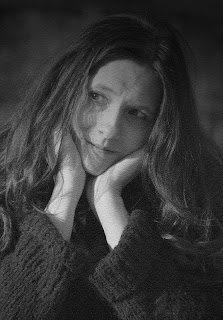 A black and white photo does wonders as well.

The biggest challenge I found in taking a self portrait is that I had nothing on which to focus the camera.  I tried making my husband stand in for me and, at one point, thought a lamp might do.

In the end, I was able to use a brick.  Who would have thought?

Sally, thank you for starting this challenge and I look forward to next week.

If you have time, take a look at Sally's blog, the Studio Sublime, and check out the other self portraits.
Posted by Tanya at 9:00 PM 36 comments:

Last January, I noticed a trend among bloggers to choose a word to capture the coming year.  I jumped on the bandwagon and chose a few words for  2012.

While I think these words still apply in 2013, I think a new word will (hopefully) guide me through the year.

My black belt test is a mere 97 days away.  I WILL practice and I WILL take the 97 days to get myself into better shape.  I have the WILL to make these things happen.

I WILL kick actual and figurative butt while sparring.

There are other goals I have for 2013 and I WILL do my best to make those happen.

Throughout the year, I've tried to develop both my beading skills and my photography skills.

I spent a good part of 2012 participating in Lori Plyler's i heart macro series.  I was usually able to take pictures while playing/walking/running with the kiddo.  (Okay, she was doing the running.)  This post is a good example of me making use of my time while the kiddo was busy climbing, swinging, sliding and running around the playground. 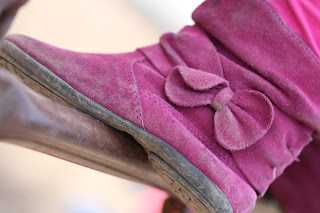 My beading skills were put to the test by Karyn, from Releases by Rufydoof.  Karyn started Beading Babes group in 2011 and the group created some wonderful pieces in 2012.  It's hard to pick a favorite, but I love that I was able to use some African bronze beads to compliment Nancy Dale's Trellis necklace in project 4.  (If you want to try Nancy's pattern, it's available in her etsy shop.) 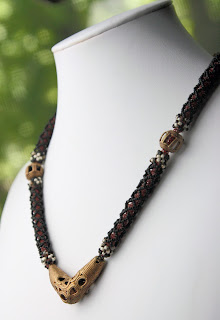 I received my 1st brown belt in karate and in kobujutsu in 2012.  (My black belt is looming around the corner -- 99 days, but who's counting?) 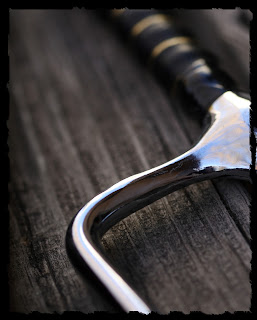 Around the time of our anniversary, my husband and I saw The Avengers, the *best* superhero movie to date.  (All hail Joss Whedon.)

I was able to convince my husband to take a few vacation days in 2012.  We traveled to Colorado for our first family vacation. 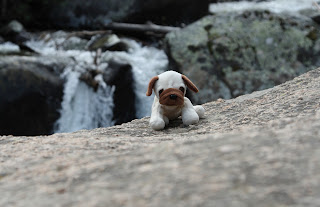 2012 was also the year the kiddo started kindergarten.  I can't believe how quickly she is growing up. 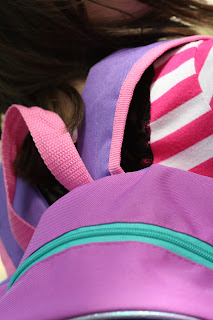 Throughout 2012, I participated in several beading challenges, my favorite of which was the 3rd annual Challenge of Color, hosted by Erin Prais-Hintz of Treasures Found and Brandi Hussey of Brandi Girl Blog.  (Erin's entry and permalinks to all the participants are here.) 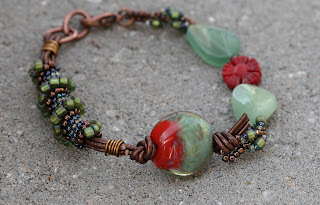 I also spent the year following other bloggers.  I feel like I know Therese, Kim, Amy and Marla, to name a few, through their words and through their work.  I also found Sharyl's blog.  Sharyl and I were able to take advantage of our close proximity and spend a few afternoons watching the kiddo play.

I'm sure there are events I am forgetting, but these stand out to me.

While most of my blog traffic originated from google searches, a few referring sites stood out:

I would like to thank everyone who has visited, commented on and followed my blog in 2012.  Every page hit and every comment means the world to me. 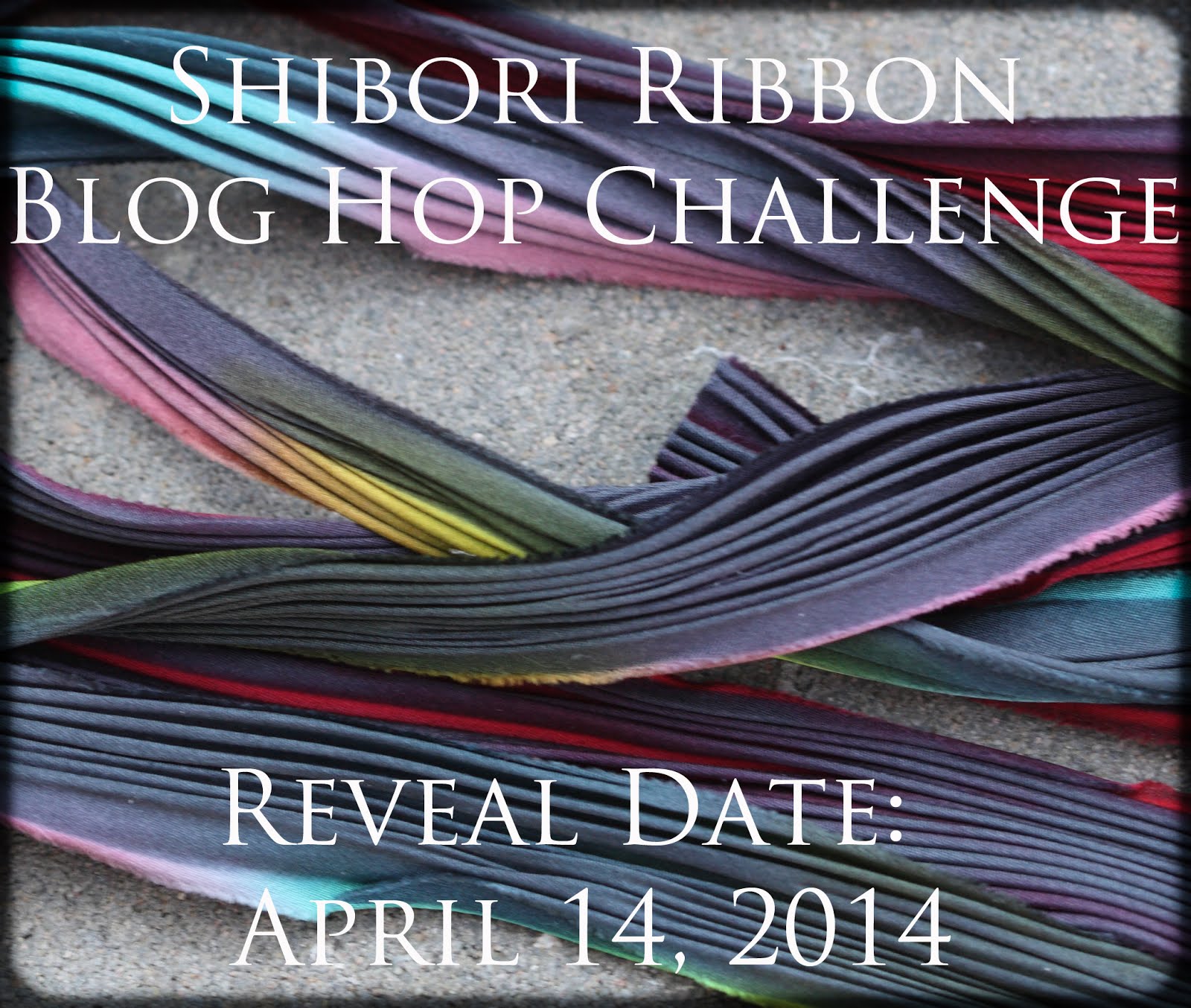 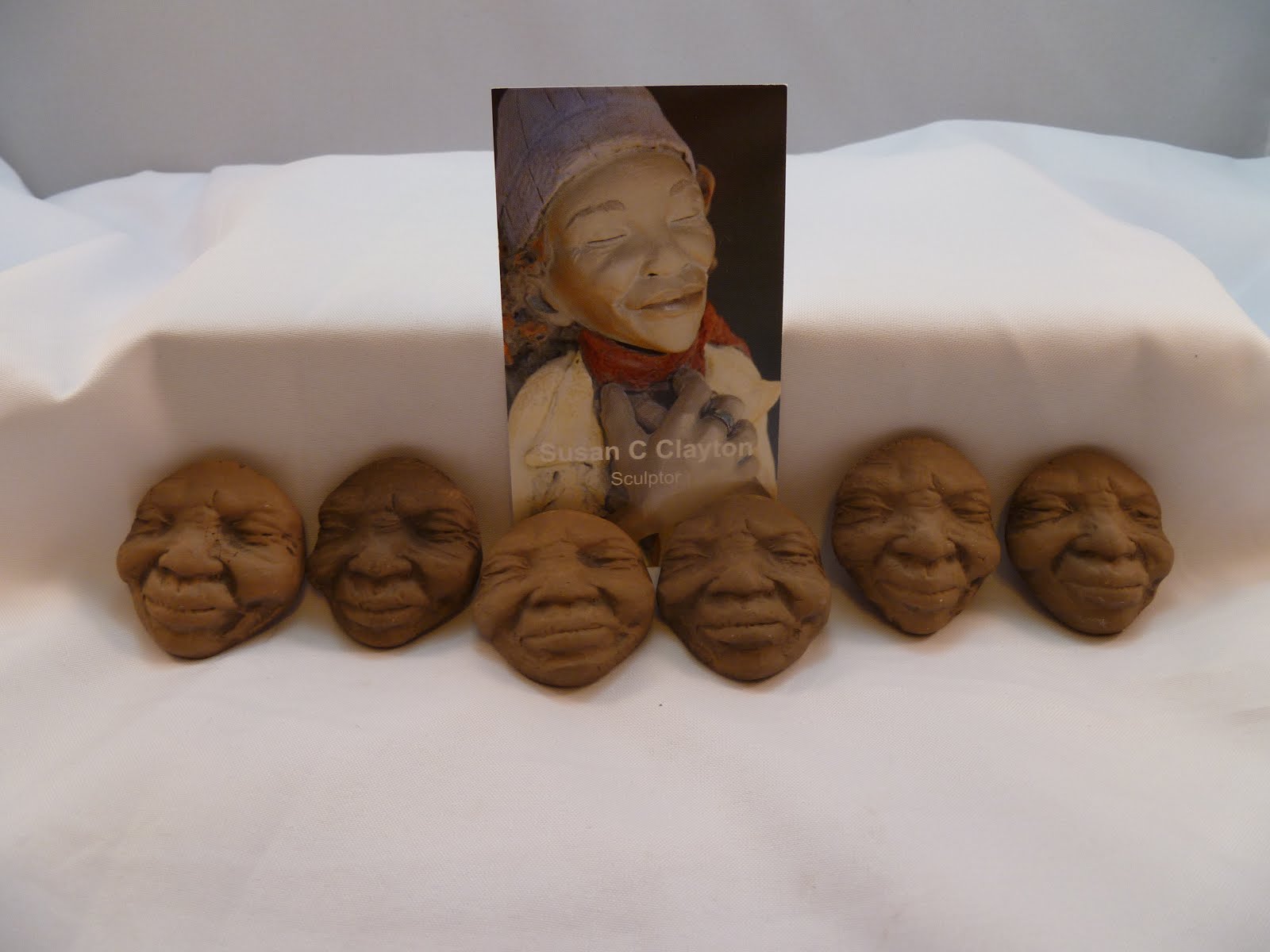 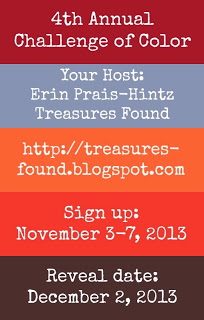 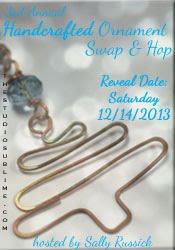 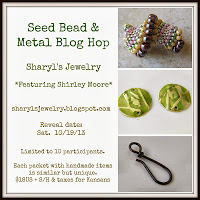 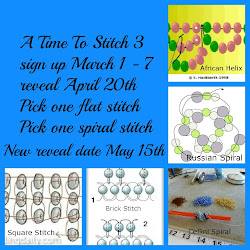 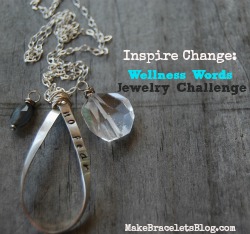